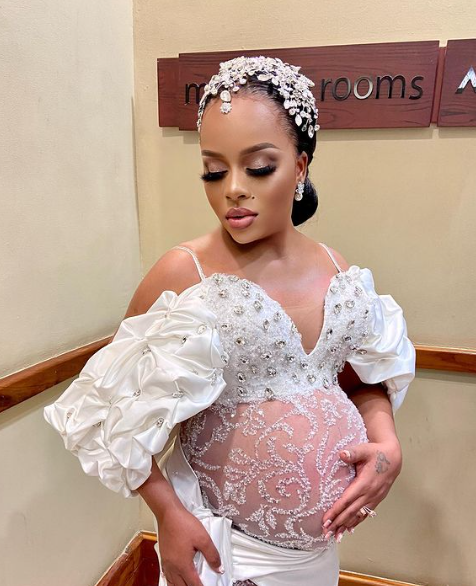 Elisha: Hehehe!!! the baby bump saga!!! well the idea initially was Nandy’s and the actual idea was to have the baby bump bare and out nothing covering it, And at first when she told me this, I was very skeptical about it, but when designing it and the thought process, I had to think of the client in particular, she Is not a nurse, or a teacher or an executive of any sort, She is an Entertainer, a pop star, She is Artistic so that has to be considered, It was her big day so she needed to turn heads and have that shock factor, We could easily have made her a maternity bridal dress but that would have been underwhelming, that would be forgettable and on a day that is that important and with her level of celebrity, we had to make her the star of that whole hall, A leading star amongst stars, I mean whether you liked it or not, it got you talking… it left an impact.

AFS: Na, je iliweza chukka muda gani for the dress to be ready?

Elisha: Time frame is tricky to calculate as it was booked two months prior to the event but the actual making it took about a week

Elisha: Changamoto, hazikuwepo she is a chilled and relaxed person in general, so sikupata zile attitude za mimba

Elisha: As a pregnant bride you gotta go major, what I say is pick a design you would want to wear even if you weren’t pregnant, and then sort out the adjustments with your designer, you gotta figure out a way to make the baby bump work, kwa sababu kama tunavojua wageni waalikwa hawatakuwa na huruma kuwa bi harusi ana mimba tusipendeze, so na wewe Vaa the best of best… your baby bump can be your perfect accessory to being the best dressed bride.

Elisha: Nandy ni super star, nandy sio mwalimu au daktari, Nandy is an entertainer hawezi kuvaa nguo za kawaida ambazo hazitashtua jamii na kuwapa watu changamoto ya maoni na mawazo, That dress is Arvant Garde… its high-fashion… it is made to cause a stir and drama not just to look pretty. So comment nzuri au mbaya the point is we made a statement and we made people think.

Jojo Gray On Being A Mom & Keeping It Stylish